The Dark Side Of The Moon entered the UK Official Charts at #2 spot on the 31st March 1973 in the 13th (and unlucky) published chart of 1973. It was in fact the highest position it would make in the UK, and slipped down to 5th the next week. Remarkably in its 40 years of incredible success Dark Side has never been #1 in the UK.

So, what “hugely successful album, from a super-band music-heavy-weight”, beat TDSOTM that week and denied it the opportunity for the #1 spot?… that dubious honour goes to K-tel’s ’20 Flash Back Greats From The Sixties’ by ‘Various Artists’. (Really.) 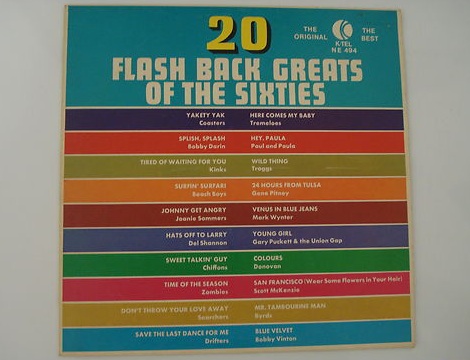 It remained at the top spot for 2 weeks! With hindsight, the success and longevity of Dark Side would make this look quite strange. The week before top spot was taken by ‘Billion Dollar Babies’ by Alice Cooper, and after the imposter’s 2 week stay at the top the next number one was ‘Houses Of The Holy’ by Led Zeppelin. (Not so bad.)

Compilation albums sold well at the time. The K-tel compilation albums of the late 1960s and ’70s were the result of a licensing deal between the original ‘As seen on TV’ Canadian marketing giant and the record companies of the day. Ronco, the US equivalent of K-tel, also ‘heavily pushed’ a proliferation of compilation albums from various artists in the ’70s. The Floyd were up against extensive TV advertising ‘muscle’ – a K-tel UK example:

The week after (in the 14th UK chart of 1973) another compilation ’40 Fantastic Hits From The 50s And 60s’, this time from Arcade Records (a Dutch record label specialising in compilations), entered at #2 behind K-tel’s “number one” album, pushing Dark Side further down. The music market was “expanding at a phenomenal rate”, Roger’s own words (1973), and compilations did very well, evidently. 1980s compilations in the UK would go on to be dominated by the (infamous) ‘Now That’s What I Call Music’ series.

(The original plan for DS40 was to help Dark Side make #1 in the UK, but the release of the Immersion set put pay to that in 2012. Perhaps we’ll regroup for DS50 in 2023 – and keep our fingers crossed that K-tel doesn’t release a compilation at the same time…)

This entry was posted in 40 Years Ago Today..., DS UK #2, Stats. Bookmark the permalink.