40 years ago today… The official US release of Dark Side (plus the real dates!…)

On the 10th March 1973 The Dark Side Of The Moon was released in the US, officially.

The Floyd were performing the sixth night (on their eighth US tour), at The Gymnasium, Kent State University, in Ohio. David Gilmour made a bet with band manager Steve O’Rourke that the album wouldn’t crack the US top 10: the album hit number one on the US Billboard charts for one week on the 28th April 1973, 7 weeks later.

*The More Likely Release Dates Of Dark Side…

Something didn’t seem to stack up with the official album release dates, so I investigated: given the chart calculation processes in both the US and UK – see date layout below – and when their respective sales weeks start, the official dates seem unlikely.

So here are the more likely release dates – and if anyone has an original receipt of their purchase on the first day of release in the US and UK please let me know!:

US probable release date: 1 March 1973*; release date must have been before the 3rd of March, with the first of the month being a deadline for production and distribution of the album (and anything less seems too ambitious, given the sessions at Abbey Road only ended at the end of January, 4 weeks before).

UK release date:  19 March 1973*; Mondays are, and were, the normal release day to ‘catch as much of the sales week’ as possible, with a release date of the 24th only allowing one day’s sales to have resulted in Dark Side entering the chart at #2. 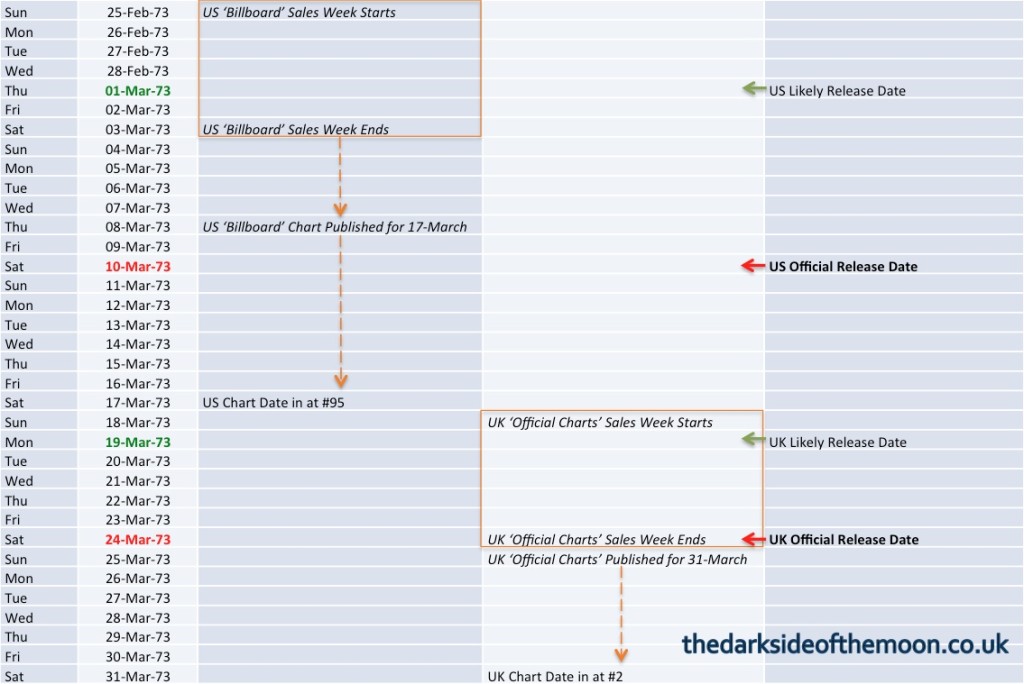 But what’s in a few days. Many happy returns Dark Side; let’s all sit down today and make sure we listen – in entirety – to one of the best and most successful albums of all time…

This entry was posted in 40 Years Ago Today.... Bookmark the permalink.